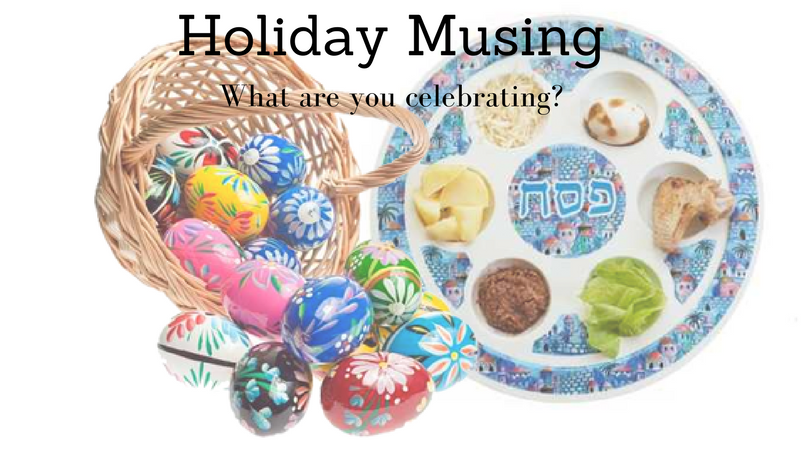 I grew up going to church in a neighborhood where most of my friends were also involved in their religious institutions. I never really thought about how our religions were similar or different past the broad stroke differences in name and basic ideology. This year Easter and the start of Passover are the same weekend, and it got me thinking about both.

How many of you are humming that song from Fiddler on the Roof now? I first saw that movie as a young child, and it was my first glimpse into a very different religion than my own. The idea that a community could be built around worshipping together was amazing to me.

My friends were mostly Roman Catholic, and I had a just few Jewish friends. I loved seeing the traditions and ceremonies in each place; I often attended services with friends. In each religion, I was excited to attend a rite of passage ceremony, and they were enough alike in purpose to make me feel comfortable. Extended families came to celebrate at the house of worship, and then later at some sort of party. The joy in the older generations at seeing us as teens perform the same rituals was evident in their smiles and in the hush around me each time.

Not all traditions passed down in families are religious. This time of year, baseball is often a family event. I was late to become a fan, but I love going to a ballpark and watching a game. I don’t even have to be a fan of either team, I just love the traditions of peanuts, keeping stats, the 7th inning stretch, and making fun of the umpires. In the fall, football is practically a religion for many people, Sunday afternoon is sacred for watching.

I haven’t attended a confirmation or a Bar/Bat Mitzvah in many years, but I would love to do so again. As a member of the older (how did that happen?) generation now, I would be that person smiling through tears as the ceremony progressed. I will be attending services this week and am looking forward to spending time with my family and friends in the process.

Relax and Enjoy Your Traditions

Whether you are attending church, temple, synagogue, or having a picnic, all of us here at BillCutterz wish you a safe and enjoyable celebration of the season.